One of the the things about buying technology is that you expect it to last for a while.  While all things have an end-of-life date, you expect the more expensive devices to last a bit longer.  That’s the case with me and my Wacom Cintiq 21UX. It was over $2000 when I bought it almost 8 years ago and a similarly sized and priced model is about the same price.  I’m less than thrilled at the prospect of spending money to get a new one, especially when I feel like all I need is a cable to fix the one that I have. But after several attempts to attain one had failed, I needed to move on.

I recently had an assignment from a client that required me to use my Wacom Intuos Pen and Touch, which to me feels like a rebranded Bamboo.  It lacks the ‘tightness’ between the pen and the tablet that my old Intuos Pro from work had.  In addition, it’s rather small, since that was the reason that I bought it in the first place was so that it would fit inside the bag with my Macbook Air. But working with it for any length of time would grow uncomfortable and annoying.  I needed a new tablet that was closer in size to the medium Intuos Pro that I had been using at my old job. And again, I didn’t want to spend the premium price on another Intuos tablet if a new Cintiq Pro was just around the corner. While the  13 inch and 16 inch Cintiq Pro’s are available now, I want to wait for either a 24 inch or a 32 inch Cintiq Pro, which won’t be released until January 2018. And again, I don’t know if they will have all the bugs ironed out of them when they are released.  So I need to wait, but I also need something that will help me get my work done without breaking the bank. That’s where the Huion Inspiroy G10T comes into play.  It’s only $139(as opposed to $249 for an Intuos of the same size). The only features that it’s missing are pen tilt and barrel rotation.  Also the multi-touch doesn’t work as well as it could.  In any case, I don’t want to spend a lot but I want a quality product that will accomplish 90% of the tasks I need to complete. And that’s why I chose to go with the Huion Inspiroy G10T .  One of the big motivators are build quality.

In comparing the  Inspiroy G10T to the Intuos Pro Medium, the drawbacks to the Inspiroy are in-line with its cheaper price. The drawbacks are mainly software related. I have never been one to use pen tilt, mainly because when I started using Wacom products, pen tilt didn’t exist. In fact my first Wacom Tablet didn’t have a USB cable (it was serial) and the pen didn’t have an eraser. So in that regard, I became used to not having an eraser, and that has stuck with me. It’s much faster to press a quick key than it is to turn the pen around in my hand. In addition, the early Wacom tablets didn’t have quick keys, so I became used to repurposing my gamepad to execute Photoshop functions. The habits I’ve developed are are result of me making do with workaround technology that exists rather than waiting for that stuff to be invented/added to existing products.

So it seems like the belief is that if you want to professional work, you need to use professional products. I think the mark of professional quality is in the work that results, not in the tool. A master with a dull tool might be able to produce better work than a novice with a sharp tool. But I think that laymen, who are often people who make hiring decisions cannot tell the difference between whether or not you used a Wacom, a Huion, a UGEE, an Acepen, an XP-Pen or a Parblo Coast. To a good artist, they can adapt. And that is what I’m trying to do with the Huion. It’s a bit rough around the edges software wise, but I can’t deny how good the stylus feels in my hand. I like the buttons on the Wacom Art pen because I can feel them, but the tapered end of the Huion makes it feel like it’s longer.

I like to think that the people coming to my site are artists with some experience so I don’t think I need to go in depth about changing nibs and stuff like that. To the tablet feels comparable to Wacom in a good way. Bear in mind that I’m coming from 2 Wacom devices that had less pressure sensitivity. I have yet to compare it with the new top of the line Intuos Pro models.

But for the price, I think the Huion Inspiroy G10T is a winner. I look forward to more quality devices from them. I hope that they improve their drivers and make them in-line with Wacom drivers, but if you can manage with out Wacom specific features like barrel rotation, then you can save yourself a couple hundred dollars.

Many of these cons are not that big a deal.  The main one I care about is barrel rotation. 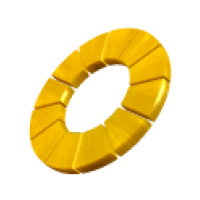 PixelColada A Las Vegas based artist working in a variety of fields and mediums. Most recently, he has been working in gaming and as a teacher.